As Kentucky prepares to square off with Wisconsin in the NCAA Final Four and move one step closer to an undefeated, 40-win season, the University of Kentucky has been dueling with one of its own – a fan and attorney claiming he has already secured trademark rights to “40-0.” But can such a term even function as a trademark, or is it just information? 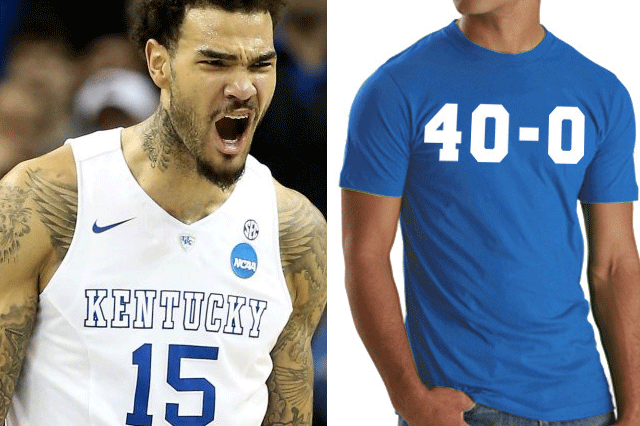 As ESPN reports, a Louisville-based lawyer named David Son is the owner of www.40and0.com, which sells blue-and-white t-shirts and apparel bearing the term “40-0.”  That term just happens to coincide with what Kentucky’s record will be if it wins the national championship next Monday. Son received a cease-and-desist letter from the University of Kentucky asking it to cease all sales on the site.

Nevertheless, Son believes he has the upper hand on Kentucky —  a pending trademark application for “40-0,” filed in February 2015. He also claims that his use of the mark dates back to 2013. Son registered the entity “40-0 LLC” on October 25, 2013, having registered the 40and0.com domain name three days earlier. (Interestingly enough, according to Son’s LinkedIn page, Son is a Kentucky fan but also a law graduate of the University of Louisville, the undisputed arch rival of Big Blue Nation.)

The crux of Kentucky’s complaint is likely not just Son’s use of the “40-0” mark but the entire premise of his site, which seeks to capitalize on Kentucky’s bid for perfection. The site may suggest a sponsorship or affiliation with the University of Kentucky based upon the colors of the bulk of apparel featured on the site (blue and white) and the clear association between “40-0” and the Wildcats’ run to an undefeated season.

To Son’s credit, he has taken a few steps to attempt to establish a unique identify for the mark.  The site now states that apparel bearing “40-0” in a colors aside from blue-and-white is “coming soon,” and includes the disclaimer “Not affiliated with any university or any professional organization.”  But an archived version of Son’s site from 2014 reveals a long meditation on the highs and lows of Kentucky fandom, suggesting his original intent was to sell apparel exclusively for Kentucky fans. And even the more generic “Who We Are” page that currently appears closely associates the term “40-0” with basketball:

Going undefeated and winning a championship is the ultimate goal of a team and its fan base.  “40-0” might as well read ”WE BELIEVE IN PERFECTION”.  It is the Holy Grail.  It is the Fountain of youth.  It is an expression of unwavering belief, even in the face of ridicule, that perfection can be attained.

Son’s lawyer told ESPN that Son “took all the steps he needed to take to establish ownership of 40-0,” and that “[t]here’s no evidence that the University of Kentucky owns any rights to 40-0.”

Unfortunately for Son, he may not own any rights either. The question left out of the ESPN’s article is whether anyone can obtain rights to what amounts to a win/loss record. The U.S. Patent and Trademark Office does not permit registration of “merely informational” slogans or terms.  According to the PTO, “the critical inquiry in determining whether a slogan or term functions as a trademark or service mark is how the proposed mark would be perceived by the relevant public.”

In other words, if the public believes a term merely conveys information or conveys support for something, it is not a source-indicating trademark and cannot be registered, nor can a user obtain exclusive rights to the term.  As this blog has previously noted, no one can obtain rights to the term “MADE IN USA,” for example.

Son’s trademark application for “40-0” won’t be examined for at least another month, but it appears that Son’s chances of obtaining a registration certificate are not nearly as promising as the Wildcats’ prospects for an unblemished season.