All around America, men will soon gather in front of their computers feverishly conducting research, generally wasting time, and participating in one of the manliest things they likely will do for quite some time:  their fantasy football league’s draft. Fantasy football is an $11 billion dollar industry (to put that into perspective, the NFL had only $6 billion in revenue last year) and there is a multitude of fantasy football-related patent applications and granted patents.  But a search of the U.S. Trademark Office’s records reveal only 56 live applications and registrations having the likely generic term “fantasy football” in their goods or services description (one of those happens to be for the WASHINGTON FEDSKINS). 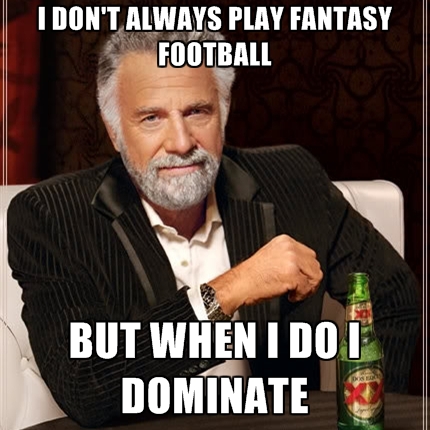 I recently ended a self-imposed hiatus from fantasy football for my UJustGotBeatByAGirl team by being the first woman ever accepted into the WAFFL league – the preeminent fantasy football league, or at least so my friends who started it over 15 years ago tell me.  Acceptance into the WAFFL league came after completing an application form longer than my law school application.  I had to find a team name to fit in with the off-color team names like the Belfast Bombers and the Junior High Pedophiles. There was also a significant essay section on trash talking and a long essay on the prospects of the Philadelphia Eagles this year.  It’s so serious, folks, that I’m surprised they didn’t make me do the 40-yd dash and take the Wonderlic.

Now acting like an owner in such a prestigious league, it’s important to me to protect the league’s important assets, including its WAFFL name.  A quick search of the USPTO records suggests that it’s available for use and registration, although internationally there is a WAFFL football league in England…but for that other kind of futbol.  So I decided to ask a question for all fantasy football players: “hey Commissioner, can I get a trademark registration for my fantasy league’s name for fantasy football league services?”

In order to get a U.S. trademark registration for a word or design, it must (1) function as a trademark, meaning it must be used to identify and distinguish the owner’s goods and services over those of others and (2) be used in interstate commerce.

First, a fantasy football league name ostensibly distinguishes one league from another league – especially when you play in multiple leagues at the same time.  The name distinguishes the entertainment services of providing and organizing a fantasy football league for one group over another’s.  A team name, however, would be unlikely to function in the trademark sense, because there really are no goods or services that your fake team is providing to others.

But as to whether a fantasy football league name would satisfy the second requirement, the typical lawyer answer applies:  “it depends.”  Interstate commerce would include any use that might possibly be regulated by the federal government under the Commerce Clause, which has been interpreted to apply to just about anything.  While secret, non-public, or certain “sham” transactions have been deemed such casual or de minimis use as to not give rise to federally registrable trademark rights, there could be room for fantasy leagues to file for federally registered trademark rights if sufficient use was shown.  For instance, if a fantasy football league were to have at least a public website and offer its league services to teams in different states, that may be enough under current law to support that there is adequate use of the mark in commerce and the website would also satisfy the specimen of use requirement for the application.

So, is your fantasy football league serious enough to warrant some trademark protection?  Doubtful, but if you really want to take the “fantasy” of fantasy football one yard further, I see trademark registrations and lucrative licensing deals for league swag in your future.