When I first heard last week about a trademark infringement lawsuit between Energizer and Duracell over pink bunny icons, my first thought was, Duracell is The Copper Top battery brand, what would motivate Duracell and how could Duracell possibly believe it had the legal right to use a pink bunny character in advertising and on battery packaging, shown below, given the likely fame of the Energizer Bunny trademark depicted above? As it turns out, there is more to the story, apparently the Duracell Bunny shown below (from 1973) actually predated the Energizer Bunny’s debut in 1989, and I also didn’t realize that the far more famous Energizer Bunny began as a parody of the (unknown to me) Duracell Bunny. 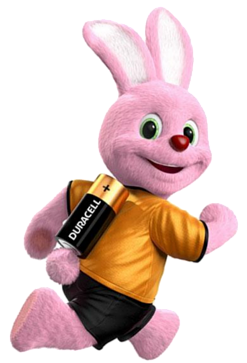 Looks like Energizer has pretty powerful trademark rights in the United States, and Duracell’s product packaging — that is used in other countries — is finding its way into the United States marketplace, causing the Energizer Bunny to become rightfully hyper and agitated.

The most intriguing aspect of the Energizer Bunny complaint is the first count for breach of contract, because the contract is obviously confidential, and the most Energizer reveals about the terms of the 1992 agreement is that it resolved a dispute stemming from Duracell’s attempt to federally register the Duracell Bunny character as a trademark, and the agreement generally “restricts and limits” the use of the Duracell Bunny, as a trademark, in the United States.

Stay tuned for Duracell’s answer, maybe we’ll understand more about the terms allegedly breached in the contract, how the Duracell Pink Bunny Packaging is finding its way into the United States, and whether Duracell is able to do anything about it.

I’m also left wondering whose battery bunny will outlast the other, in other words, whose bunny will be drained of its energy for litigation first?