Taking a spin through REI for a jacket yesterday, I happened upon a Swiss outdoor clothing brand that is a new one to me, called Mammut: My favorable experience with Marmot outdoor clothing (at REI too) had me taking a second look (and searching for any connection with Marmot), given the close similarity in the names: Despite the similarity in the brand names, it appears there is no connection between the clothing brands. As trademark types tend to say, they appear to peacefully co-exist in the marketplace.

Similarity for trademark purposes is governed by considering similarity as to sight, sound, and meaning. It seems pretty clear to me that there is similarity in sight and sound, but not meaning.

As to the sight and sound of the words themselves, the beginning, middle, and end are the same, the two-syllable cadence is the same, and the visual identity of the red-colored Marmot term can be viewed as Mammot, with a telescoping of the nearly-touching lower case “r” and the adjacent letter “m”. What do you think?

When it comes to meaning, however, it isn’t a close question, assuming the relevant public understands that mammut translates to mammoth, and further assuming consumers understand that a marmot looks like this (credit to Inklein), nothing like a woolly mammoth: 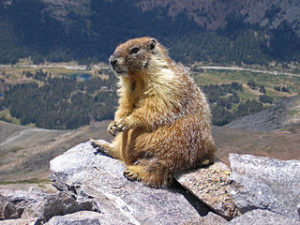 Perhaps the focus on different meanings to help justify peaceful coexistence has been furthered by Mammot’s inclusion of the depiction of a mammoth as part of its visual brand identity.

On that point, it is interesting to note that Marmot has been federally-registered as a standard character word mark in connection with clothing items, for almost thirty years, with Marmot claiming first use in the U.S. all the way back to 1974.

On the other hand, while the Mammut visual identity complete with the mammoth logo shown above has been federally-registered in the U.S. for clothing items since 2000 (initially not based on use in commerce, but instead on a Swiss trademark registration), the word only Mammut standard character mark has only been registered for almost exactly five years — in fact, drum roll please, today is the last day a petition to cancel could be filed against the Mammut word-only trademark registration, at least on priority and likelihood of confusion grounds.

I’m thinking that the Mammut word-only trademark isn’t likely to become extinct, given the present timeline, but who knows, stay tuned, stranger things have happened.

To the extent you were advising Marmot would you be comfortable allowing the word-only registration to stand for Mammut without the mammoth logo to clarify the meaning?