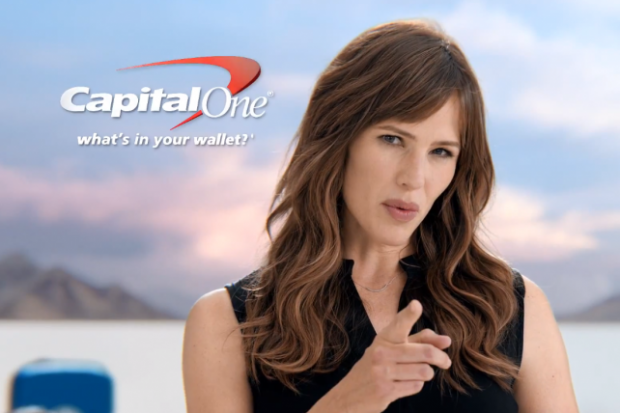 Last year, in my post entitled What’s in Your Wallet, a Cafe?, I had this to say about the iconic Capital One tagline:

“Since 2000, Capital One Financial — the nation’s largest direct bank — has been promoting its credit card services by asking What’s in Your Wallet? Three years later it began promoting banking and other financial services using the same iconic tagline, slogan, and question. By 2011, it had achieved so much traction that What’s in Your Wallet? was inducted into the Advertising Walk of Fame as one of the 16 Greatest Slogans in History.”

It seems as though, whenever a brand owner comes up with a truly inventive tagline or slogan, it is almost predictable and inevitable there will be others who follow along, looking for a short cut, those willing to take a free ride on the underlying creative branding concept.

For example, when the Got Milk? campaign came along and enjoyed the vast success it did for so many years, even years later, it has almost become cliche for others to replace milk for whatever they happen to be selling, while using the remainder of the inventive branding concept:

So, there was Got Wine? Got Water? And, there was and is a multitude more Got [Whatever]? marks, far too many to prevent or stop, I’m sure, but what about setting some realistic scope to the rights and drawing some reasonable trademark lines in the sand?

For example, when Otis Spunkmeyer registered Got Cookies? as a trademark for cookies, it never apparently thought twice about the relatedness and complementary nature of cookies to milk, and the California Milk Processor Board surprisingly never objected. Instead, it simply registered its Got Milk? slogan for the very same goods and now coexists.

Putting legality aside for a moment, is one sign of a successful tagline the spawning of others that copy the underlying creative concept and adapt it to their particular business?

It’s fascinating to me that as much as Capital One must spend on its ad budget, and celebrity endorsements (Jennifer Garner and Samuel Jackson), it appears to view its trademark rights as razor thin, as it is almost completely absent from any TTAB enforcement activities, at least as a plaintiff, with none involving the What’s in Your Wallet? tagline and trademark, except this extension of time to oppose What’s in Your Jewelry Box?, but is now registered, for “providing monetary exchange services, namely, exchanging precious metals of others for money,” and this extension of time to oppose registration of What’s in Your Vacation? for “customer loyalty reward program featuring the accumulation of points by the program members and the subsequent redemption of points towards gifts and discounts in air travel, hotel lodging, restaurants, home appliances, and other services and products.”

Apparently not, given this one (pun intended): What’s Not in Your Wallet? for “on-line retail store services featuring clothing, gifts and videos.”

Of course, this is not what I expected to find when a Rosland Capital commercial caught my eye this weekend and prompted me to dig for some trademark and blogging gold ingots. I didn’t realize when I heard celebrity William Devane ask What’s in Your Safe? at the end of a Rosland Capital commercial (in a way that reminded me of the nearly identical final question Jennifer Garner keeps asking in her Capital One commercials), I had no idea that the creativity in the concept of the Capital One tagline was like the cow already out of the barn, down the road, and far away from the dairy farm.

Speaking of cows, why did Chick-fil-A think it could stop Bo Muller-Moore’s Eat More Kale? based upon its rights in the distinctive, but very different, Eat Mor Chikin campaign and mark?

Back to Capital One, for our creative types out there, what is the rationale for doing nothing about the multitude of taglines that What’s in Your Wallet? has spawned, especially those in the financial services field and those for complementary products?